I cringe every time I hear hunters give game cooking advice that starts like this “Dice a game roast and put it in a pot, add a chopped onion, carrot and cover it with mushroom soup.  Simmer for an hour and mmmmm, best game meal you will ever have!!”  Now, I know this isn’t how everyone cooks their game meat but I still hear it far too often on hunting forums.

A lot of effort, time and care goes into the process of getting wild game meat, so why do so many of us fumble the last crucial step?  Why do we cover up the natural flavour of the best tasting meat out there?  I would hazard a guess that for most hunters the process of cooking up a game meal can be a daunting task and the simplicity of dousing the dish with teriyaki sauce or throwing a can Campbells at it is a pretty safe bet.

I get it.  So what’s a guy with a freezer full of game meat supposed to do heading into summer?  BBQ of course.  And also, KISS.  Keep it simple stupi… you get the idea.

So instead of sharing one complex recipe, I am going to share a couple techniques that you can use in many applications. I will also share two simple sauces that go great with BBQ wild game.  Pull these sauces out during BBQ season and you will look like a culinary rockstar on the grill.

Game meat can be tough compared to pampered grain-fed beef, so every hunter should have one of these.  The game we take are usually much older than cattle at slaughter and they have also led a much more active life.  All that running from predators creates well-developed muscles that can cook up tough.  What you might not know is that beef processors will often use this type of machine on tougher primal cuts before it gets cut into steaks for your grill.  Sirloin, for example quite often gets this treatment.

Essentially a Jaccard machine uses little blades to cut the meat which shortens the grains and makes it eat more tender.  Once Jaccarded, the meat will also suck up marinade much easier.

Run the Jaccard over the meat a couple times, it works best if the blades are perpendicular to the grain of the meat.  Don’t go crazy though, too much Jaccarding can make the meat mushy.  Pull out this technique with cuts like roasts, backstraps, and tenderloins, but not on braised or diced cuts, it gets lost with fully cooked cuts.

Cleaning a Jaccard machine can be a pain but its worth the effort. The Jaccard machine being used to tenderize a bottom round from a Mountain Goat.  The blades of the Jaccard are perpendicular to the direction of the grain of the meat. (Get one here)

Recently at my day job, I found myself testing un-marinated pork rib button bones vs button bones that had been marinated overnight in chopped garlic and sesame oil.  Nothing in this marinade stood out as a “meat tenderizer” but the difference between the two was surprising, with the marinated version being much more tender.

Super rough guide to marinades below, pick a couple ingredients or one from each category.  Don’t be afraid to think outside the box either, there aren’t any rules in cooking.

Acid: Lemon juice, vinegar, wine, soy, yoghurt/buttermilk (I would save these last two for lighter meats like grouse, chukar, rabbits).  Acid can cook meat so the more you add the less time you will want to let it marinade for.

Enzymes:  Do your research on this one but let’s just say that if you throw some diced pineapple, sesame oil, garlic and soy together with a tougher cut of game meat, you will be making meat magic for the BBQ…  Enzymes in pineapple will break down proteins in the meat and make it more tender.  Leave it too long though and you will have mushy meat.  Start with an hour or two and work up from there.

Do your thing.  I am not stepping on any toes here.

The Importance of Resting

Easiest way to explain this one: You cook the perfect looking steak, you put it on the cutting board and cut it open right away, the juices flood out of the meat and you are left with a dry looking steak with a well-done ring around the outside and the inside still looks rare.  This is because the steak didn’t have time to rest which allows the juices and the cook to equalize across the entire steak.  As hard as it is to wait, you have to give the meat time to relax after cooking.  Wrap it in aluminum foil with the shiny side facing the meat and let it rest somewhere warm for a minimum of 5 minutes or more before you cut into it.  You can always return it to the heat briefly if it needs a quick warm up before serving. Two-pronged approach with this one.  First and foremost, slicing game meat thinly against the grain will help to make it eat more tender.  Slice as thin as you can down to 1/8” but always follow the resting technique above first or risk having the juices run out of your game meat.  Secondly, when you nail the cook on your game meat you will want to slice it up in front of your guests and show it off just a little…  Plus slicing up the meat for your guests is a nice touch of hospitality.  Keep in mind when you slice the meat it will cool down very quickly so have everything ready to serve before you start slicing. Last step but o’ so crucial.  Once sliced it must be seasoned again.  The main reason restaurant food tastes so good is because it is well seasoned.  Unless you are brining your meat first, it is very hard to get seasoning into the middle of the meat.  So once the meat is sliced, sprinkle the top of meat with a generous sprinkle of a coarse salt.  This is what you have been saving your premium sea salt for!  The hit of salt and the small crunchy texture will make your meal sing.

Now that you have some techniques to use with your next BBQ game meal, here is a couple super simple sauces that will let the game meat shine but also make you look like a badass.  Both of these sauces can be made ahead of time, so come dinner time you can focus on cooking the perfect piece of meat. Argentinian BBQ sauce.  This sauce is fresh, vibrant and really packs the flavour.  Pair this with any grilled meat for rave reviews.  Smash this sauce up in a mortar and pestle if you have one, the mortar also makes a great dish to serve it in.  If you don’t have a mortar and pestle, smash and chop the garlic and cilantro on your cutting board and mix it all together in a bowl. This sauce was inspired from a recipe I got from Bon Apetite magazine and have been playing with for a while.  It is super versatile and could easily claim to be Spanish, South American or even North African.  Make this the day before as it gets better after sitting for a couple days.  To really make it your own be sure to taste it before you serve and adjust the flavour with salt, vinegar or even some cayenne if you want extra heat. 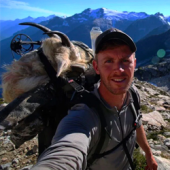 Equipped with a sharp eye for the right photo, a chefs taste for the right flavors, and an insatiable need for adventure, Connor Gabbot can flex his skill and pass on knowledge in the same sentence A collection of unique and flavor defying recipes that will add creativity and connection to the way you procure and prepare your wild game.

A collection of unique and flavor defying recipes that will add creativity and connection to the way you procure and prepare your wild game.