Is Ultralight All That it’s Cracked Up to Be? Glancing back at the past, it feels like just yesterday. I was heading into the Arizona backcountry for my first ever backpack hunt. My brother and I would be hunting coues deer with our bows. A hefty challenge on its own. Adding backpacking into it set in place another level of difficulty. The whole time on the way into our camp I was trying to figure out how to lighten the load of my pack for future backpack hunts. For 3 days, I had around 60 pounds in there, and was feeling it. In the coming years after that hunt took place, I explored all sorts of ways for getting more ultralight in my backcountry system. Through that experience though, my thoughts on the matter have evolved in a direction I wouldn’t expect. Especially being that dude carrying a 60pound pack up the mountain. Going ultralight definitely has its benefits, but is it all that it’s cracked up to be?

There are definitely some obvious benefits to going more ultralight. The first being the lack of weight. With less weight in the pack, you aren’t burning as much energy on these hikes. You’ll also be able to maneuver through terrain much easier with camp on your back. This has a direct effect on your performance in the field. Backpack hunting is difficult enough as it is, so not carrying around a ton of extra weight will only aid in that performance. For longer duration hunts, this is incredibly beneficial for “staying in the game.”

Another benefit is the extra space in your backpack. These ultralight items are much smaller and packable than gear on the opposite end of the spectrum. This is going to help one avoid hanging gear off of their pack, as well as giving more room on the inside of the backpack for food. In backcountry hunting, your system is pretty constant. The only variable, aside from clothing, is food. With more space, one can take more food, meaning they can stay out in the field for a longer duration of time. In my first years of backpack hunting, I’d have to make a food run back to the truck in the middle of my hunt. This was for a 10 day hunt. Now, that I’ve slimmed down my system, there isn’t a need to make those food runs. That gives more time for hunting.

With the ups comes the downs as well with going ultralight. One of the downsides right up front is the cost. Ultralight gear tends to be pretty steep. It’s funny that we spend a bunch of money to go live in the dirt for a week or so, but it is what it is. We are paying for the convenience of not carrying that extra weight. Other things that might drag one down are durability and functionality. Some, not all, of this ultralight gear is very delicate. It makes ripping stuff easier, which is a bummer to have in the back of your head out there. Shelters, sleeping bags, and sleeping pads come to mind here. It also extends out to other stuff as well like boots. These companies are shedding weight somewhere, and sometimes it compromises the durability of said item.

On the functionality front, what comes to mind specifically is backpacks. There are some REALLY ultralight backpacks out there, particularly in the backpacking world. While it may sound all good having a backpack that is 3-4 pounds, these lack on the weight carrying ability. You’d surely be fine with camp on your back. With an animal though? That is a different story entirely. A backpack that is a little heavier made to haul out heavy loads will do you much better.

What Works Best for YOU?

What’s important to note here within the discussion of going ultralight is finding what truly works for you personally. This is crucial for a good experience back there. Just because you might see or hear about some other hunter getting by as an ultra minimalist, doesn’t mean that you have to. If it’s your cup of tea, then by all means start your engines. But if there is something out there that you feel benefits your style and your backcountry system, but is a tad heavier, then there is nothing wrong with packing it. Especially, if it’s going to do you well. A buddy of mine packs an ultralight chair for glassing. That is something I’d never consider doing, but for him, he says it keeps him glassing longer.

I’ve also opted for heavier items here and there. This year I picked up a new set of boots that are a bit heavier. They are stiffer with more support than I had. In the past, I’ve always been a pretty ultralight boot guy. Since I started hunting the steep high country though, that has changed. The extra support that I’m getting from that heavier boot is going to aid me in foot fatigue, not to mention for during heavy pack outs in nasty terrain. A hunter would do right for themselves by “weighing” the pros and cons of certain gear items.

At the end of the road, ultralight gear items definitely have their place. They do wonders for lightening the loads of our packs, which lets us not only feel better overall, but it gives us more capability for carrying heavy loads out. There isn’t a one sized fits all approach though to this. Take the time to truly evaluate your own system and style of hunting. If there is an area where you can save weight and not compromise performance, then it’s worth it. If it isn’t though, be honest with yourself. Sometimes looking beneath the surface of this stuff can give way to a better experience overall. And I’ve never heard anyone complain about a better experience. 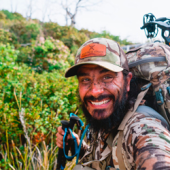